DPI’s Runa Alam explains how she achieves growth and impact with private equity investing in Africa.

Runa Alam learned about the power of money early in life and vowed to use it for good. After studying development economics with Nobel Laureate Arthur Lewis at Princeton, she focused on gaining private-sector training at Harvard Business School, Morgan Stanley, and some early emerging-­market private equity funds. In 2007 she co-founded London-based Development Partners International, or DPI, to invest across Africa. Alam, who turns 62 in January, spoke with Bloomberg Markets in October about how her fund combines a focus on growth as well as on impact. The interview was edited for length and clarity.

MELISSA KARSH: What led you to what you do today?
RUNA ALAM: I was born in Bangladesh, moved to Germany and Canada, back to Bangladesh, and then to the U.S. It’s hard not to see, even as a child, the tremendous poverty in the ’60s and ’70s in Bangladesh. Then there’s the contrast to wealth, clean streets. That led me to think about the root causes of poverty, that poverty itself is an indignity, and that I wanted to do something. So even back then, I realized that most of the money in the world is in the private sector. I wanted to be in the private sector, I wanted to be in finance, and I wanted to work directly in regions that are ­lower-income to invest, create companies, and help development.

MK: How did you get your start in development economics?
RA: I had the incredible luck to study with Sir Arthur Lewis, a Nobel Prize winner who formulated the theory behind development in the developed countries, but also what we’ve seen in the last 30 years in developing countries. That is, people moving from the countryside to the city, so urbanization. Where I work now in Africa has the fastest urbanization rate in the world right now. I did one of my Princeton scholar junior papers with Sir Arthur Lewis, and he made a great impression on me. He was the first Black professor at LSE [the London School of Economics] in London and also at Princeton. He was quite a pioneer.

MK: Can you give us a rundown on DPI and its ­strategy?
RA: DPI is a pan-African investor, so we invest across the whole continent of Africa, which is 54 countries. We manage $2 billion, and with co-investment it’s an AUM [assets under management] of $2.8 billion. We just finished raising our third fund, which was $900 million, above the target of $800 million. The strategy for all three funds has been the same, which is investing in goods and services of companies that benefit from the middle class in Africa. Think about a person living in a city, or moving to a city, and what they need. So we’ve invested in banks and insurance companies, agribusiness, and education. We have invested in a university company.

MK: Has the pandemic changed anything?
RA: We are looking at all of our companies with a view to ­digitalization. So we have a company called Letshego in Botswana, but it’s actually in 11 countries in Africa. At the beginning of the pandemic in February/March of last year, 2% of the transactions were done online. Today, it’s 74%. We have another company in the consumer-lending area in Egypt called MNT-Halan. MNT was a consumer-lending company that acquired Halan, which is a fintech company, and together they are digitizing and going into the mass market now. So huge opportunity both for sales growth and for efficiency, which means cash flow or Ebitda [earnings before interest, taxes, depreciation, and amortization] growth.

Channel VAS allows you to prepay and get credit online to pay for your phone instead of having to go to a kiosk and physically buy a card. That caused the company to grow during Covid, and it’s done extremely well. Another example is a more recent investment in Kelix Bio, the first company of its type to try to build a pan-African pharmaceutical company. They will take drugs, ­therapeutics, formulations to places in Africa where they just don’t go yet, and reduce the price to the consumer.

MK: Can you tell me about your investors?
RA: In broad buckets, there are three types. One you would find in any private equity funds: U.S., European, and African pension funds, sovereign funds, endowments, and family offices. For the first time in Fund III we now have impact investors, so that’s the second bucket. The third bucket is somewhat unique to emerging markets and especially to Africa, which is development institutions. The private equity industry in Africa was started by the ­development institutions—it was not started by private-sector capital.

MK: How do you define impact?
RA: We have four impact buckets that are all equal. The first is gender balance. The G-7 DFIs [Development Finance Institutions] picked us as the flagship fund for gender balance. We have a much higher percentage of women in senior positions. I’m the CEO, I’m a woman, and we have a much higher percentage of women in the company, close to 50-50 men and women. So that’s quite different from the average private equity fund, but we work on gender balance also in our portfolio companies. We follow the criteria of the 2x Challenge, which is what was developed by the ­development institutions of the G-7 countries and now many more countries.

The second is climate change. We try to have base ­measurements of electricity use, which is another way of measuring carbon footprint, and then we try to reduce it both by efficiency and by renewables. We own a company in Nigeria called Food Concepts, which is in the quick-service restaurant business. They are now gender balanced at the company—in fact, on their executive committee there are more women than men. With employees, women comprise 51% of the workforce. They also started ­experimenting with putting solar on their stores to cut down on their carbon ­footprint. These are things we encouraged them to do.

Third is job creation and enhancement. We are classic growth investors. It’s not unusual in our portfolio to have companies growing at 40%, 50% annually. With that of course comes jobs. We have 49,000 employees in our portfolio companies across Africa. Last year with Covid, we early on worked with our companies not to do retrenchment. When Africa opened up again last summer, these companies actually had the ability to grow and take over market share. They had the workforce to buy and integrate acquisitions.

MK: How do you address any of the criticisms leveled at impact and ESG [environmental, social, and governance] investing, such as greenwashing claims in finance?
RA: If you think about the 17 SDGs [Sustainable Development Goals], there’s one way of measuring climate change or carbon footprint. There’s a completely different way of measuring life underwater. It may not be measurable at all. There is such a diversity of impact work as well as measurement. Until we get to a place where we can talk about these metrics like we do an IRR [internal rate of return], which you can compare across funds, or an MOIC [multiple on invested capital]—that may never happen or may take many years—but until we get there it’s unclear who has delivered impact and who hasn’t.

MK: What do you consider your most successful investment?
RA: One of the most successful is Biopharm. It has grown every year and has made a change from 10% of the Ebitda coming from manufacturing and the rest from distribution of pharmaceuticals to now close to 40% of Ebitda coming from manufacturing. By the way, Algeria is the second-largest pharmaceutical market in Africa after South Africa, so it’s not small. This company has been a long hold. We first invested in 2013. We usually sell earlier. But in order to balance the portfolio, you have to hold some of your growth companies for longer.

MK: You’re based in London. How does that work with your investments and companies in Africa?
RA: London happens to be—and has been for the last 20 years—one of the easiest places to get to anywhere in Africa. In a way, [as a regional hub] it looks like the Singapore of Africa, although ­Singapore happens to be part of Asia and London is not part of Africa. The airlines from London fly throughout Africa. In Africa there are very few regional airlines, so often when you want to go to a country next door or two over, you have to fly through London.

Our investors are from the U.S., Europe, Africa, and the Middle East. London is a major financial hub. The London Stock Exchange has many African countries listed on it. There are analysts for Africa here, and the CEOs of our companies often come to London. We’ve also found that being in one office makes us a tighter group—more nimble, more collegial—and can uphold a culture of excellence. So it’s worked from a culture perspective, but it’s also made our work in Africa easier. 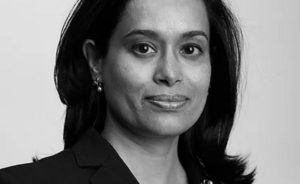